APPLE Recalls Watch Series 6 Because Of A Terrible Screen Issue

Apple China has today announced a recall of one its products to fix the permanently black screen problem. Apple has confirmed that some 40mm Apple Watch Series 6 models may have a permanently black screen. The affected devices are expected to be produced between April 2021 – September 2021. To determine if your Apple Watch Series 6 is eligible for the program, please use the serial number lookup instrument below. Apple Authorized Service Providers or Apple will offer overhaul services for eligible devices. 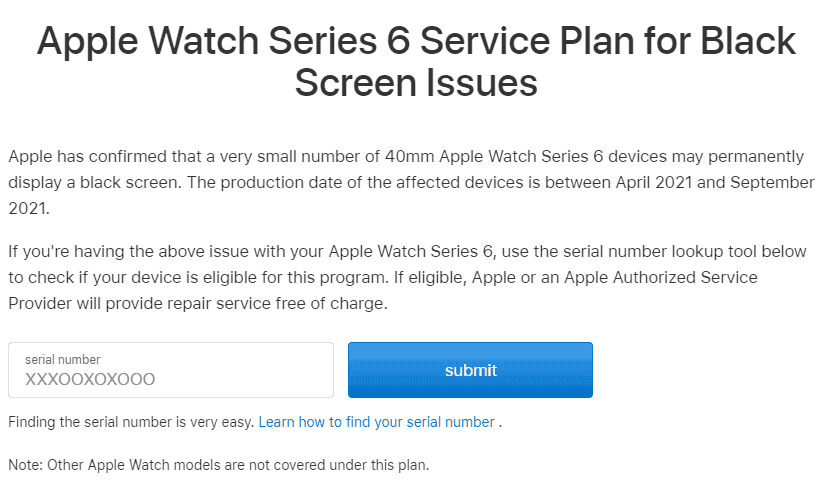 If you own the equipment mentioned above, you can visit the official website to see if you’re in the recall batch. Click here to check if your device is one of the models that are being recalled. Apple officials also reiterate that the program provides coverage for eligible Apple Watch Series 6 for two years from the date of the device’s first retail sale.

The Apple Watch Series 6 is expected to hit the markets in 2020. The smartwatch supports blood oxygen monitoring and a blood oxygen sensor. The Apple Watch Series 6 also features an S6 dual core processor and the A13 Bionic Chip. This makes the watch 20% more responsive than the previous generation. The smartwatch is also available in new gold, red, ink, and blue colors.

APPLE WATCH OXIMETER CAN NOT BE USE FOR MEDICAL PURPOSES

“I find it difficult to believe anyone is strapping an Apple Watch to their wrist and expecting to get the same kind of readings they get from a designed-for-purpose, FDA-approved, oximeter. Do I agree with this WaPo article that Apple Watch Series 6 – and the Fitbit device … isn’t as accurate as a finger-mounted device? Yes, I do. But to call it “mostly useless” is crazy talk. It’s perfectly useful if it’s used in the way it’s supposed to be used. As a holistic approach to overall health and wellness. Don’t expect it to tell you if you’re having some sort of medical emergency. Apple isn’t claiming it will”.

The Apple Watch 6 Series is not suitable to monitor oxygen levels or for lung health monitoring, despite this defense. The value you get is probably a deviation from what the real thing. Reports suggest that the deviation lies between 3% and 7 percent. But, it is not clear what this value will look like in the feature. Nevertheless, this is Apple’s first try and it is still working on the feature to make it better.