Huawei today officially announced that it will host a product launch conference at 19.00 on April 28th. Huawei Mate Xs 2 will be launched at the event. The foldable smartphone will be available with some significant upgrades. According to Yu Chengdong, Huawei’s CEO Huawei is a market leader in foldable smartphones and continues to overcome technical barriers. Huawei boasts of many industry firsts from the Mate X eagle wing folding hinge technology to the Mate X2 patented double-swirl water drop hinge technology, to the vertical seamless folding of the P50 Pocket. Huawei is still the leader in aesthetics. 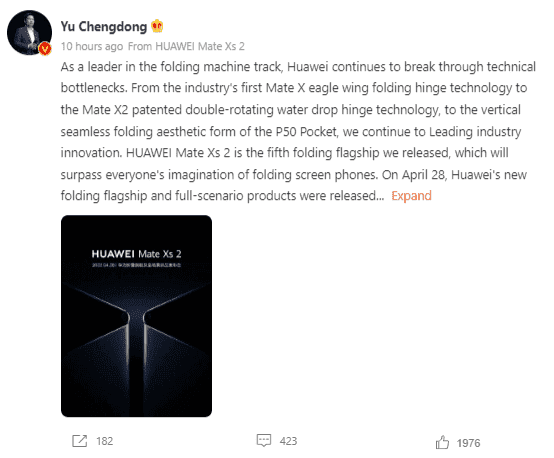 He emphasized: “HUAWEI Mate Xs 2 is the fifth foldable flagship we released, which will surpass everyone’s imagination of folding-screen phones.”

According to the official poster, Huawei Mate Xs 2 appears to inherit the outer fold scheme from the previous generation Mate Xs. This design is quite different to the current inner folding scheme. The screen is attached to the fuselage and only one piece of screen covers the whole machine.

Huawei was the first to use the eaglewing folding design in its Mate Xs. The four-layer structure of the eaglewing hinge structure is made up of 100+ precision devices. The screen protection layer made of polymer material is the top, while the second layer is flexible screen. The third layer is made of soft rubber support sheets and the bottom layer is a hinge. This supports the Mate Xs screen and folds it.

See also:  An investigation is underway into an American company that transferred tech to Huawei

There are expectations that the Huawei Mate Xs 2 will also bring a more powerful design in terms of hinges, screens, etc., which is very worth looking forward to.

The Huawei Mate Xs 2 is expected to come in three colours, according to reports. The front design uses a single punch-hole that hosts the selfie camera and it’s in the upper right corner. This foldable flagship smartphone’s rear camera uses a multi-camera setup.

According to other reports, the hinge of the Mate Xs 2 may be different. The external foldable screen will become creaseless. The new hinges are lighter and more durable than the old ones. In 2020, reports suggested that Huawei would release the Mate Xs folding-screen mobile phone. This phone is the first to fold with an eagle-wing design. In just a few days we will have official information on this flagship phone.