iPhone 13 was the most popular smartphone worldwide in the first quarter this year. IDC analysts based their analysis of mobile device markets made this assertion. At the same time, they did not name the total number of iPhone 13 sold and its market share; confining themselves to a statement that this is the most popular model on the market in the first three months of this year.

In second place was another Apple model – the iPhone 13 Pro Max. This shows that people are willing to spend more for a phone with a larger display, good battery life, and a great camera. But in third place was the relatively affordable Samsung Galaxy A12, which sold better than other models of the South Korean giant.

The iPhone 13 Pro occupied the fourth position and completed the top five Samsung Galaxy A32 most in-demand devices. This ranking proves that the iPhone 13 series is popular with users and has made it market leaders in terms sales. The company will once again come out in the black and will be able to make decent money on sales of their smartphones.

TOP 5 BEST-SELLING MARTPHONES IN THE WORLD

Apple marketers are not in vain eating their bread, skillfully maintaining the high image of the company’s products. There are many people around the world who are willing to pay a fair amount for the iPhone’s ecosystem, despite the fact of the numerous Android flagships available. Samsung smartphones are a good choice for those who want something affordable but still functional. The company’s devices from the top 5 managed to attract consumers; by offering a nice design, affordable price, a good set of features; and a well-known nameplate. 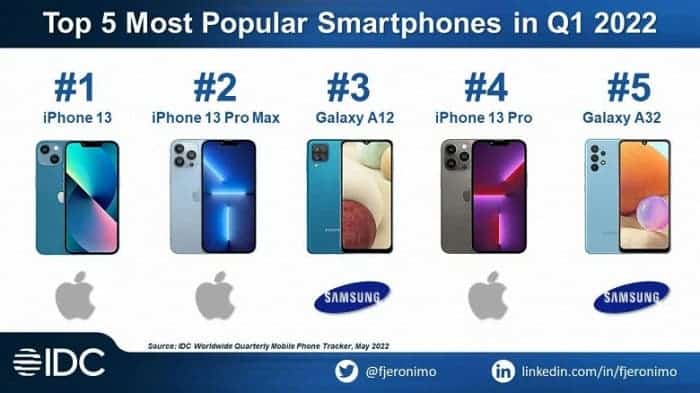 A few analysts gave alarming predictions about smartphone shipments declining in 2022 at the beginning of this year. The main reasons were the pandemic, supply chain issues and inflation. Their predictions are becoming reality.

According to reports, major smartphone manufacturers like Oppo and Vivo have had to cut down on the production of their mobile devices. They have already made it known to component suppliers that the company is revising its production plans and cutting orders by 20% in the second and three quarters of 2018. This means that, instead of Xiaomi releasing 200 million smartphones, it now plans to release 160-180 millions. Even if this plan is fulfilled, it will still be worse than last year’s 191 million devices.

Analysts believe that the drop in smartphone production could be caused by the coronavirus pandemic and falling demand, as well as overproduction. Now the company’s warehouses have a sufficient number of devices that still need to sell and there is no point in increasing stocks.