Whatsapp now allows group calls with up to 32 people

Meta has been working hard over the past months to improve WhatsApp experience. While Telegram and other big players like WhatsApp gained more features over time, the green messenger remained faithful to its users. WhatsApp is now working to add features that are popular among its competitors. WhatsApp recently added a multi-device mode, which does not require that you stay connected to your smartphone. The company also announcedThere will be major updates over the next few months, which will bring many new features to the site including the Communities. The company has expanded the number of group calls to 32.

WhatsApp today began rolling out a stable version update for iOS devices that supports 32-person calls. It also features a revamped user interface, waveforms and other improvements. Unfortunately, this feature is not available on Android smartphones. Anyway, it’s natural for these companies to bring the good to iOS first.

WhatsApp currently allows users to make simultaneous phone calls with multiple people at once. During the pandemic, WhatsApp’s feature could only be used with four people. The company decided to expand this number to eight because of increased demand. WhatsApp now wants its messenger to be a tool for larger meetings. You won’t need to rely on Google Meet if you want to make quick calls with up to 32 participants. 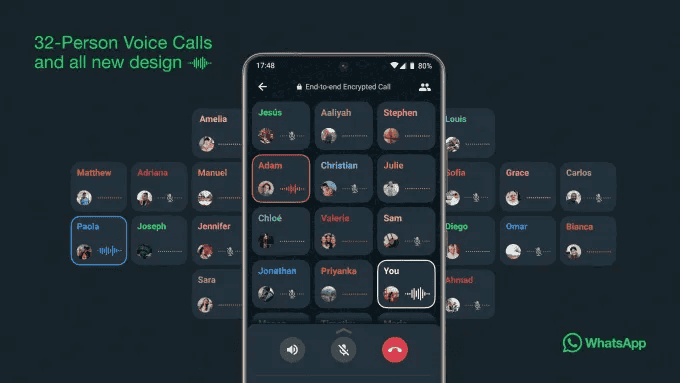 WhatsApp Groups will make it possible to have voice calls with up 32 people. The company modified the way that a call shows participants on the screen. After all, the previous UI wouldn’t accommodate 32 participants too easily. Waveform images are used to identify different WhatsApp users. It is worth noting that the update can be found in the app’s current version 22.8.80. It weighs in at 109.70MB for iPhones, and is a huge novelty.

You can also read:  WhatsApp will let you dictate messages using Smart Glasses

Curiously, the Desktop client does not have this feature. We’re to see if WhatsApp will bring the feature to PCs through its Desktop or Web client. It may take the company a while to get this feature up and running on all platforms. It took many months for the multi-device mode to stabilize. According to recent reports, it’s still slow.

WhatsApp is working to increase the number of Groups available on its platform. Besides the new 32-person calls and the Communities, WhatsApp has also been working on the Polls feature. Polls are very popular on social media apps such as Twitter, and we’re sure there is a demand for them on WhatsApp. The company is also gearing up to introduce a new paid subscription that will extend the multi-device support.